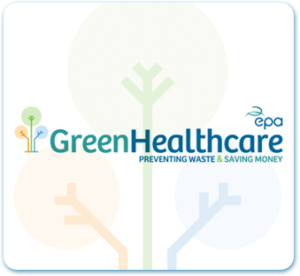 CTC is leading a prevention team to work directly with healthcare organisations in the application of prevention tools and techniques developed in the course of previous projects. This, The Green Healthcare Programme, is a major national initiative being implemented as part of the EPA’s National Waste Prevention Programme (NWPP), and will, in time, greatly enhance the environmental performance of this sector.

Initially, three hospitals in Cork were included as part of a pilot study in 2009. In the first instance it was important to engage with hospital management and staff to ensure buy in to the project. This included reviewing with them the significant amount of work already done on energy and water surveys. Separate methodologies were then developed to undertake food waste, clinical waste and mixed residual waste characterisation surveys as well as for water flow surveys.

Since completing the pilot, in 2010 nine more hospitals have enabled waste surveys to be completed across the country. Between the pilot phase and the surveys noted above, almost four thousand bed capacity will have been covered (25% of total national capacity). This will rise to 36% of total when surveys are completed on a further five hospitals who have volunteered for the project. This will bring to 17 the number of hospitals engaged in the first year of the project.

The results of these surveys are now being analysed but again show great promise to make substantial resource and financial savings. Benchmarks on waste, water and energy consumption per hospital bed capacity will emerge in time from these surveys. This in turn will enable any healthcare organisation to check their resource efficiency performance against national and international norms. Based on experience gained during the project, a resource efficiency toolkit is being developed to include: training materials, information booklets/leaflets, PowerPoint slides, posters and a DVD.

We use cookies on our website to give you the most relevant experience by remembering your preferences and repeat visits. By clicking “Accept”, you consent to the use of ALL the cookies.
Cookie settingsACCEPT
Manage consent

This website uses cookies to improve your experience while you navigate through the website. Out of these, the cookies that are categorized as necessary are stored on your browser as they are essential for the working of basic functionalities of the website. We also use third-party cookies that help us analyze and understand how you use this website. These cookies will be stored in your browser only with your consent. You also have the option to opt-out of these cookies. But opting out of some of these cookies may affect your browsing experience.
Necessary Always Enabled

Performance cookies are used to understand and analyze the key performance indexes of the website which helps in delivering a better user experience for the visitors.

Analytical cookies are used to understand how visitors interact with the website. These cookies help provide information on metrics the number of visitors, bounce rate, traffic source, etc.

Advertisement cookies are used to provide visitors with relevant ads and marketing campaigns. These cookies track visitors across websites and collect information to provide customized ads.

Other uncategorized cookies are those that are being analyzed and have not been classified into a category as yet.