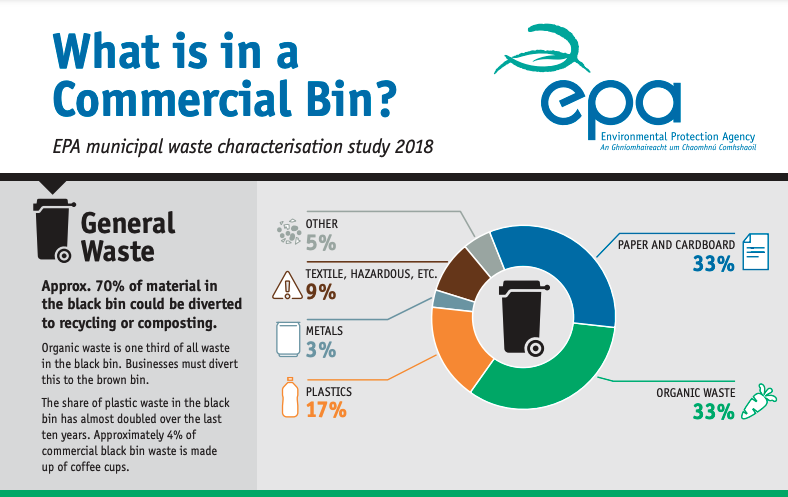 The Clean Technology Centre has been commissioned by the EPA to identify significant commercial sectors producing municipal waste.

Ireland was one of the first countries (if not the first) to acknowledge, through its commercial waste characterisation methodology, the heterogeneity of waste generated by businesses in the various commercial sectors. In 2002, CTC, with support from the EPA, developed the original sector-based commercial waste characterisation procedure. This methodology entailed doing very detailed surveys in a small number of businesses within the largest waste producing commercial sectors in the country. This approach has been broadly retained during the subsequent National Waste Characterisation Surveys, in 2004 and 2008, both of which CTC worked on in partnership with RPS Group.

However, a major issue with this method, when applied in 2002, 2004 and 2008, was the limited data set used to determine the character of waste for each of these sectors. While the data from the individual business surveys was very comprehensive (a week’s worth of waste was assessed), typically between two and five surveys were used to generate the profile for the main sectors. The number of surveys conducted was limited by funding and the updated methodology of 2014 (where CTC led a review of the commercial waste characterisation best practice) was designed to bring a higher degree of statistical robustness to the characterisation of commercial waste. The 2014 methodology was essentially a trade-off between very accurate site data and statistically robust sectoral data. This method was applied in the 2018 National Waste Characterisation Study, with commercial side of this study led by CTC, with assistance from RPS.

With the next large scale national municipal waste characterisation study due to commence in 2021, the EPA has now sought to address one of the weaknesses in the current method that has previously been identified by CTC i.e. the accurate identification and quantification of the commercial sectors in Ireland that produce the greatest tonnages of municipal waste.

In 2018 the process of determining the size of sectors was facilitated by Repak and, while questionnaire returns were deemed acceptable (~40% of respondents returned surveys) there is no doubt that, considering the fundamental importance of this information, this aspect of the overall methodology needed to be improved.

It is important to note that waste data reporting has improved significantly since the study in 2008 and the NWCPO database now provides a breakdown of the type of waste (i.e. according to List of Waste classification) collected by different waste collectors on a county-by-county basis. NWCPO does not, unfortunately, provide this information broken down by sectoral NACE codes.

Therefore, in order to get this information today, the largest commercial waste contractors still need to be contacted directly to provide a breakdown of their waste collection volumes based on predetermined NACE classifications. This was a major task in the project.

The primary objective of the project was to identify the commercial sectors that produce the greatest tonnages of municipal waste in Ireland to enable the refinement of the national municipal waste characterisation model. Additionally, it was expected that the results of this work would help inform the next phase of waste characterisation and provide direction in terms of identifying additional sectors that should be considered as well as improving the basis for scaling up the sectoral waste profiles.

In line with the RFT four tasks were undertaken to achieve the project aim. The methodology employed was based on the experience of CTC in previous national waste characterisations and was informed throughout through consultations with the waste management sector and EPA.