Qualifying and Quantifying the Reuse Sector in Ireland (Q2REUSE) 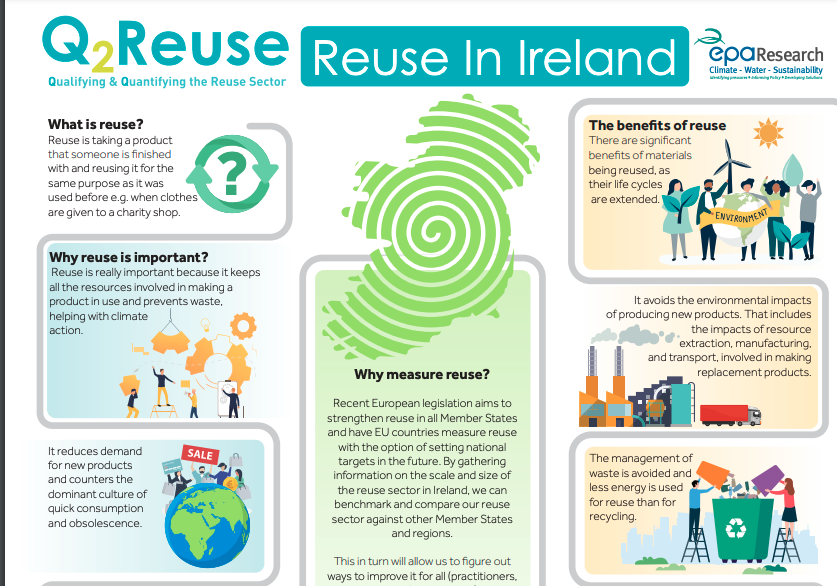 The Clean Technology Centre has undertaken a major research study on Qualifying and Quantifying the Reuse Sector in Ireland (Q2REUSE).

The project was an Environmental Protection Agency (EPA) funded research project investigating methodologies to assess and measure the Irish reuse sector.  This project was part of the EPA 2018 Research Call in order to meet the requirements of the revised Waste Framework Directive (WFD) that Member States (MS) take ‘appropriate measures to prevent waste generation and monitor and assess progress in the implementation of such measures’.

In March, 2019, a consortium led by The Clean Technology Centre at MTU Cork, with the Community Resources Network Ireland (CRNI), The Rediscovery Centre, The Eastern Midlands Waste Region and Tadhg Coakley began work on the research. A systematic review of the reuse landscape in Ireland was undertaken, providing insights into how the sector can be quantified, developed and compared to other EU Member States.

The environmental, economic and social benefits of reuse  are well documented. Reuse is one of the main elements of the EU’s Circular Economy Package.

Firstly the research team carried out an International Best Practice Review in 10 countries: Scotland,  New South Wales, United Kingdom, Flanders, Finland, Netherlands, New Zealand, Greece and New York City. The results showed that some regions were advanced in the measurement of reuse, while others were at an early stage. Best practice examples were noted to inform the project’s recommendations.

The research team used the EU definition as reuse as: ‘any operation by which products or components that are not waste are used again for the same purpose for which they were conceived.’  Based on parameters imposed by this definition and best practice a decision tree to visualise the application of the definition was developed and, from this, a mapping flowchart was produced to track the material flow of reuse in Ireland.

The team determined that the most appropriate point of measurement for reuse is at the final point of sale or exchange, as this is the ultimate point of transfer from one user to the next.

The project identified practitioners of reuse in Ireland and carried out quantitative and more detailed qualitative surveys.

Reuse data regarding the reuse levels in Ireland in 2019 and 2020 were extrapolated from the survey.

Analysis of these surveys provided the researchers with the necessary information with which to develop a methodology to measure reuse in Ireland in future.

Some of the main project outputs are available here: 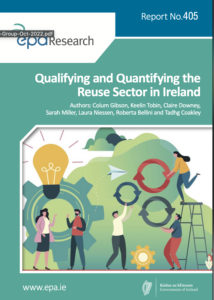 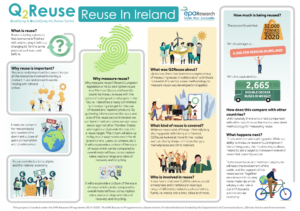 Some intermediate results of the research are published here

Qualifying and Quantifying the Reuse Sector in Ireland (Q2REUSE)

Colum Gibson
Centre Manager
colum.gibson@ctc-cork.ie
Colum Gibson
Centre Manager
Colum is the Clean Technology Centre manager, a Senior Environmental Consultant and programme manager with a PhD in Physical Chemistry. He is an IEMA Auditor and has worked with CTC for almost 20 years. Colum has extensive experience working with industry, the waste sector, local authorities, communities and national agencies. He has worked on a broad range of topics, including energy efficiency, environmental indicators, waste management and prevention, water and energy assessments, zero emissions and waste, environmental management systems, creative thinking, innovation and sustainable community development.
colum.gibson@ctc-cork.ie
Keelin Tobin
Environmental Researcher
keelin.tobin@ctc-cork.ie
Keelin Tobin
Environmental Researcher
Keelin holds an MA (Anthropology of Food), a Research Masters (Business) and a BSc (International Development and Food Policy). As an Environmental Researcher at CTC, Keelin undertakes research, coordinates programmes, leads social media, and carries out consultancy work. Keelin’s expertise is focused on food; it also extends to other areas of environmental sustainability. Keelin has experience conducting on-site food waste assessments, presenting at seminars and conferences, and producing reports. Keelin is also a trained and experienced chef and part-time lecturer to Culinary Arts students at MTU.
keelin.tobin@ctc-cork.ie
Tadhg Coakley
Researcher/Independent Consultant to CTC
tadhg.coakley@ctc-cork.ie
Tadhg Coakley
Researcher/Independent Consultant to CTC
Tadhg Coakley is an experienced environmental project manager and researcher and has been working for the Clean Technology Centre for over 29 years. In that time he has led many CTC projects for several Irish and European clients, including local authorities, national agencies the European Commission. His main focus now is on environmental policy issues, how to move Ireland to a low carbon economy. He has written several major research reports influencing environmental policy in Ireland.
tadhg.coakley@ctc-cork.ie